What is a Brain Hemorrhage? 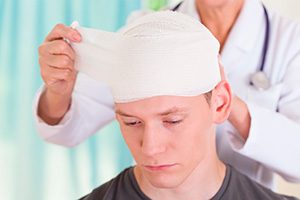 A brain hemorrhage, otherwise known as a cerebral hemorrhage or brain bleed, is a potentially life-threatening type of stroke caused by blood vessels inside the brain that become damaged and begin to bleed. This causes pressure and localized blood pooling within the brain tissue itself or between the brain and the skull, resulting in potential clotting, loss of oxygen, and damage to the brain cells.

How a Brain Hemorrhage Damages the Brain

In either case, the brain does not store oxygen and relies on blood vessels to bring oxygen and nutrients to it. The pooling of collected blood during a brain hemorrhage can cut off this blood flow, depriving the brain of essential oxygen. When the brain is deprived of oxygen, brain cells begin to die, along with related nerves and corresponding body functions. Once brain cells die off, they do not regenerate, so a brain hemorrhage can result in serious mental and physical disability.

How Serious is a Brain Hemorrhage?

The severity of a brain hemorrhage will depend on several things:

What Causes a Brain Hemorrhage or Brain Bleed?

Brain hemorrhages can have many different causes, including:

Depending on the size of the bleed and what area of the brain is involved, symptoms of a brain hemorrhage can vary dramatically. They can include:

Although symptoms of some brain hemorrhages can be sudden, some may take days or even weeks to become apparent. Symptoms may be mild at first and then develop as the pressure increases on the brain. As more blood fills the cavity inside the skull or at the brain itself, symptoms will often become more severe.

A suspected brain hemorrhage should be considered a medical emergency and treated immediately. It is critical to get to emergency facilities as soon as possible to get a bleed diagnosed and treatment started. The sooner treatment begins, the less damage to the brain, which can improve the chances for recovery.

How Do Doctors Detect a Brain Hemorrhage?

Other tests that the doctor may order include:

How a Brain Bleed is Treated

Individuals who have been diagnosed with a brain hemorrhage must be monitored closely for heart rhythm, oxygen levels, and skull pressure with early intervention to stabilize blood pressure and breathing. Sometimes, a ventilator may be required to ensure that there is enough oxygen going to the brain and other organs. Once the person has been stabilized, the attending physicians must make decisions about their next moves rapidly. If decisions are not made properly and things go wrong, you may be in need of a Kansas City brain bleed lawyer

Depending on the size and location of the bleed, surgery may be required if:

Some brain hemorrhages don’t require surgery but instead can be treated by using:

Other options for long-term treatment can include physical and occupational therapies and speech therapies to address lost functions. Physicians will also typically recommend lifestyle changes to reduce the risk of another future brain hemorrhage.

What is the Prognosis For a Brain Hemorrhage?

The survival rate for brain hemorrhages is dependent on the cause of the hemorrhage, the size and location of it, and how quickly and successfully treatment was administered. While the majority of people who have suffered a brain hemorrhage will survive, it may leave many with a loss of basic skills such as speech function and performing everyday tasks.

Experiencing a brain hemorrhage can be very scary. So many factors come into play that will determine the end results of your over health. If you or a family member has suffered symptoms of a brain hemorrhage, getting emergency attention immediately is vital. The sooner a brain hemorrhage is diagnosed and treated, the better the long-term prognosis. The attorneys at Smith & Mohlman Injury Law are here to help and fight for your rights. Contact us today.