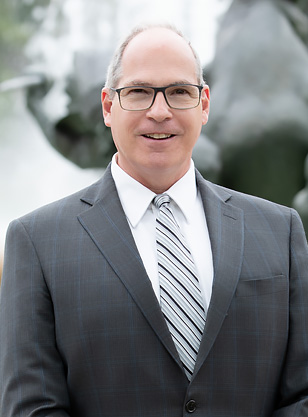 Michael graduated from Kearney State College with honors with a degree in Biology in 1984.  He attended law school at the University of Kansas School of Law.  He was president of his graduating class in 1987.  He began his legal career in Wichita, Kansas where he worked as a bankruptcy litigator for a commercial litigation firm.  He moved to Kansas City in 1990 where he worked as a trial lawyer in an insurance defense firm for 3 years.  Michael spent nearly 25 years as an in-house attorney for 2 separate insurance companies defending the companies and their customers in all forms of personal injury cases including motor vehicle accidents, premises liability, and uninsured and underinsured motorists.  He is now using that experience to represent injury victims in claims and lawsuits against those same insurance companies. During his career, Michael has tried more than 40 jury trials and more than 50 bench trials.  He has argued cases before the Kansas and Missouri Court of Appeals, as well as the Kansas Supreme Court.

Michael has been married to his wife Janie for nearly 39 years.  He has 3 children:  Audrey, Timothy, and Valerie.  When not spending his time practicing law, or enjoying time with his family, Michael loves reading, movies, attending church and working out.